Tradition has it that the tomb of the apostle James the Great was discovered in 814 in Compostela, under the reign of Alphonse II. Alphonse is considered the first pilgrim and he started the Original Way, which departs from Oviedo’s Cathedral. In the Middle Ages they built a street outside the walls of the city that ended at the Gascons’ Gate of the old medieval wall, and a great number of houses and trades were grouped there.

The intense economic activity in medieval Oviedo attracted the Gascons to the city due to the many French pilgrims who came to the city to revere the relics in the Cathedral of San Salvador on the Pilgrims’ Route.

Twelve centuries later, the old quarter has turned into Gascona Street and in in our Sidrería (Cider house) La Manzana we still offer the pilgrims of Saint James’ Way our menu. 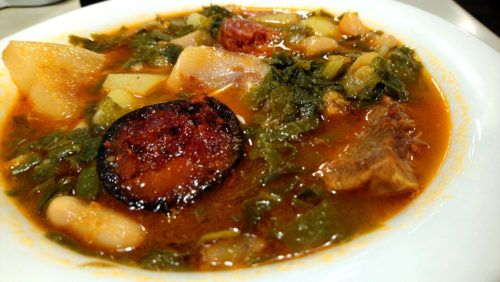 This website uses cookies to improve your experience while you navigate through the website. Out of these, the cookies that are categorized as necessary are stored on your browser as they are essential for the working of basic functionalities of the website. We also use third-party cookies that help us analyze and understand how you use this website. These cookies will be stored in your browser only with your consent. You also have the option to opt-out of these cookies. But opting out of some of these cookies may affect your browsing experience.
Necessary Siempre activado
Necessary cookies are absolutely essential for the website to function properly. This category only includes cookies that ensures basic functionalities and security features of the website. These cookies do not store any personal information.
Non-necessary
Any cookies that may not be particularly necessary for the website to function and is used specifically to collect user personal data via analytics, ads, other embedded contents are termed as non-necessary cookies. It is mandatory to procure user consent prior to running these cookies on your website.
GUARDAR Y ACEPTAR
Mi carrito
El carrito está vacío.